Do you have a startup mentor that you have failed to thank? It doesn’t take long, and I’ll bet that they would appreciate it!

The summer before (and during) my senior year in high school (August 1983 to February 1984), I worked for Au Bon Pain (https://en.wikipedia.org/wiki/Au_Bon_Pain) in the newly expanded Maine Mall food court in South Portland, Maine.

Here are some Polaroid instant pics that my mother took of me (from a scrapbook that she also made for me) showing me in my Au Bon Pain (ABP) apron and beret:

I’m pretty sure that I still have that beret (not provided by APB) somewhere.

During my time at ABP, I got to meet, work with, and talk to Au Bon Pain founder, Ron Shaich. My boss, Jim Barrett, said that Ron liked to get behind the counter and work at newly opened locations, and that if Ron got in the way, then I should just hip-check him out of the way! (Jim was a funny dude.)

So I got to work side-by-side with Ron Shaich, and I took him up on his offer to be open to suggestions for improvement. I made several suggestions, including a better/faster/stronger way to process sandwich orders.

Ron also said that he would write a letter documenting my contributions. So after I left Au Bon Pain, I wrote to him, on 1984-03-20, to ask for said letter. It wasn’t a letter of recommendation, and I’m not entirely sure why I asked for it, but 36+ years later, now I know. I asked for the letter so that I could write this blog post!

Here is a photo and a transcript of Ron’s letter (from that same scrapbook): 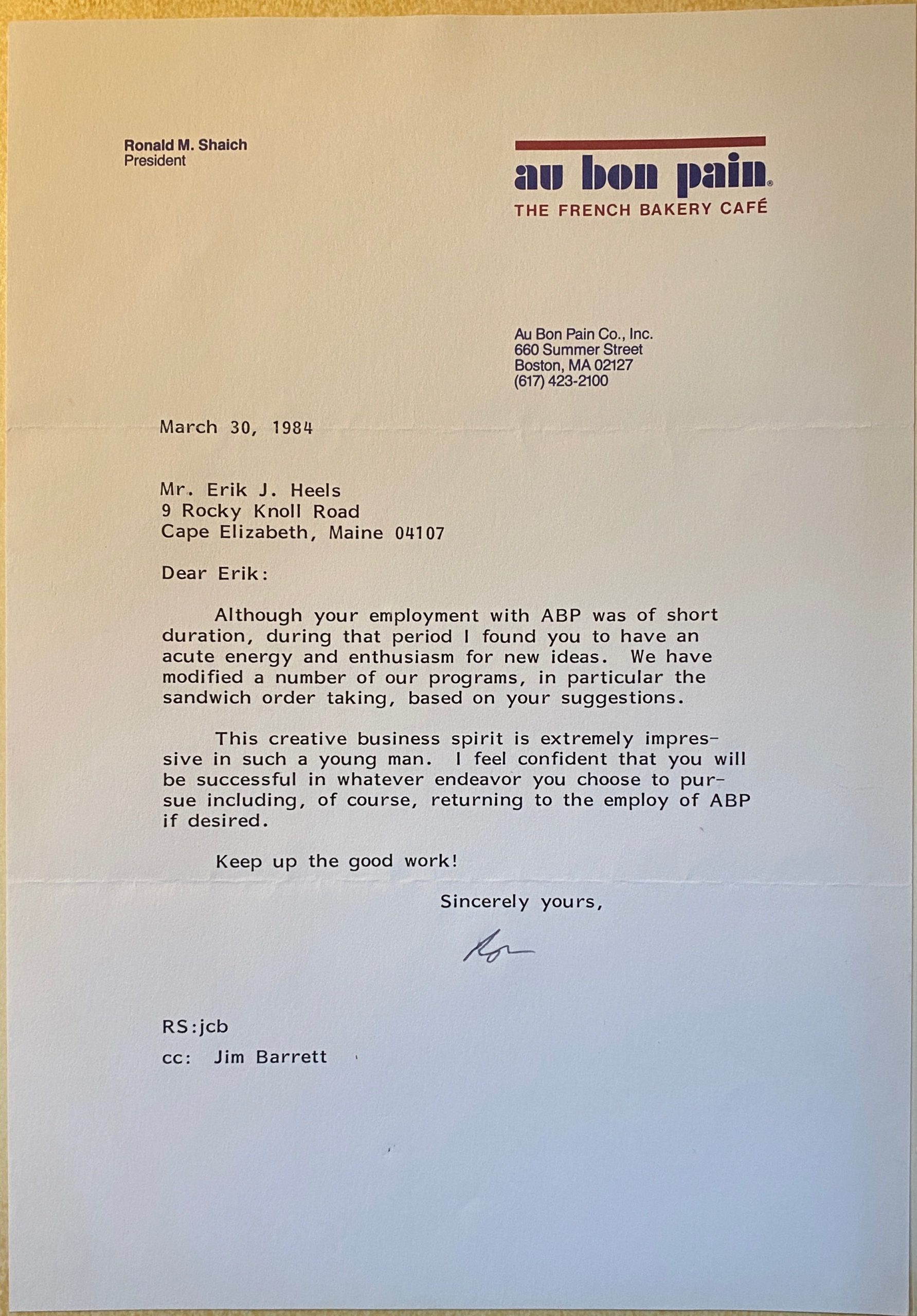 Although your employment with ABP was of short duration, during that period I found you to have an acute energy and enthusiasm for new ideas. We have modified a number of our programs, in particular the sandwich order taking, based on your suggestions.

This creative business spirit is extremely impressive in such a young man. I feel confident that you will be successful in whatever endeavor you choose to pursue including, of course, returning to the employ of ABP if desired.

Keep up the good work!

In the spring of 2001, after 6+ years of working in various marketing roles for startups, I left my last startup gig and found myself contemplating what I wanted to do next. I listed all of the jobs that I had ever had including mowing lawns, painting houses, Au Bon Pain, the United States Air Force, and all of the startup gigs. I identified the jobs that I loved, the ones that I hated, and the ones that I felt indifferent about. Then I looked for what each had in common. For the jobs that I loved, I was either (1) working with super smart people or (2) the boss. So I decided to found Clocktower and then hire super smart people!

Unsurprisingly, I put Au Bon Pain in the “love” column. Actions speak louder than words, and Ron Shaich was (and presumably still is) a man of both action and words.

Today, as it says in my LinkedIn profile (https://www.linkedin.com/in/erikjheels/), I am a startup addict! I have worked at, founded/cofounded, mentored, and lawyered hundreds of startups. Clocktower (http://www.clocktowerlaw.com/) is now in its 20th year, and 23 of our startup clients have been acquired by public companies.

My startup addiction started at Au Bon Pain in 1983.

So thank you, Ron, and keep up the good work!